Here it comes! we continue with the battle report of the game. Today, turn 2. How will Team Kul react to imperial tactics based on a line of Steam Tanks? Will Magnus' army maintain that impeccable firing rate? Keep reading to find out! 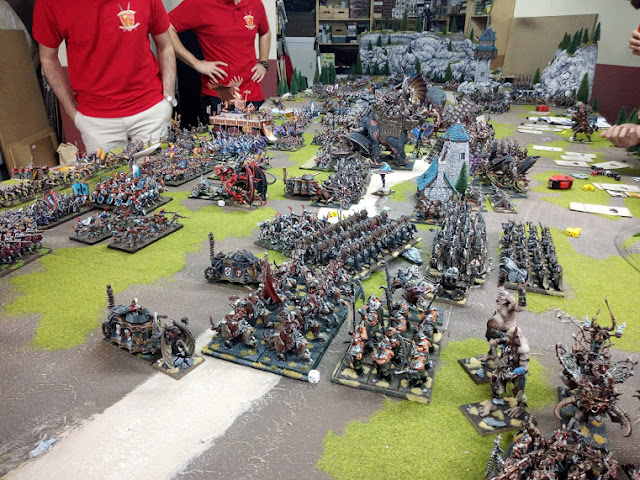 If you want to read about deployment and turn 1, click here. For next turn, clik here: turn 3


The Imperial firepower had managed to shoot down many enemies, but their number was endless; the living took the place of the fallen and the wounded were trampled and left behind. There was no place for compassion between the ranks of Chaos, nor with one's own or with strangers. The fastest creatures began to reach their enemies. The first to receive the charge were the tanks, which withstand stoically despite the torrent of blows received. But not all of them resisted such punishment. The Altdorf Steam Tank, which was manning the bridge, was crushed under the huge hoofs of a mammoth. Very close to them, the Captain on Pegasus which was leading the Ar-Ulrik forces was soaked by a Troll’s acid rain vomit, which disintegrated rider and mount alike. However, the determination of humans was far from being broken; a great unit of Chaos Knights charged against the regiment of Altdorf’s Spearmen, taking advantage of their disordered ranks while crossing the river. The charge was brutal, but the Imperial soldiers held the position, being aware that the Count Elector of Reikland was watching them closely.

But it was in the center of the battlefield where the most epic combat was fought. Mammoth Angkor, joined by a huge Chimera, charged against the nearest Flagellant horde. The lunatics fought to their last forces...

On the eastern flank, a Bloodthirster managed to reach the Knights of the White Wolf, close to the Empire missile troops’ line. The Grand Master of the Order managed to shoot down the beast in combat, but they had to mourn the loss of several brothers. Inside the city, An'ggrath continued to advance through the broad streets of Kislev, still unable to reach the evasive enemies, but followed by a tide of Daemons...


The huge losses suffered in the previous turn made Team Kul react. There were two ways to get rid of enemy fire: eliminating their war machines or engaging in close combat. Since the enemy artillery was far away and safeguarded by hundreds of missile troops, the only option was to reach combat. In this sense, the Chaos army was forced to make risky charges; some of which managed to reach the Empire frontline, but others fell short, impeding the advance of the troops that followed.

However, most of monsters from the center and the west flank reached their objectives: the two Mammoths entered in close combat and one of them dispatched the Steam Tank that guarded the bridge. The other, Angkor, charged against Flagellants. Joined by a Chimera, their furious assault left only one of the 36 Flagellants alive. They could not overrun, but to remain engaged. This fact also had a good part: they could not chose as targets in the next Empire Shooting phase.

The rest of the Steam Tanks positioned in the middle of the battlefield were rammed, but all of them withstood barely damaged. With the unbreakable special rule, it was clear that would take many phases to finish off those steel behemoths. Even the mighty unit of 12 Skullcrushers only managed to inflict three wounds to one of them.

In the far west of the battlefield, the Trolls dispatched the Captain on Pegasus without any difficulty and prepared themselves to receive the charge of the Winged Lancers. On the other hand, a unit of 14 Chaos Knights charged against the horde of Altdorf’s Halberdiers located in the river (this terrain piece removes their rank bonus and denies the chance to be steadfast) and they did a good job against those miserable infantry lads... but the Empire Generals took the Break Test with three dice (there was a Captain leading them) and they roll a triple 1! For Sigmar, that was truly Insane Courage!

In the magic phase, Teclis was forced to used his dispel scroll to deny the cast of the most powerful Chaos magic and the remaining spells were also dispelled or caused minor damage; only a few Swordmasters of Hoeth fell, being the target of a Magic missile. One of the Hellcannons got a Hit! on the Lothern Sea Guard regiment, who was shielding Teclis. Several Elves fell, but they stood its ground.

A wall of steel contained the Hordes of Chaos in the center of the battlefield. Magnus' strategy was taking effect and most of the Steam Tanks were withstanding perfectly. He had put the anvil in its place; now it was the time for the hammer. At his command, numerous regiments of heavy cavalry charged against the enemy, leaving behind the infantry and the artillery. If they did not manage to break the enemy front at that moment, the Leader of the Empire knew that the battle would turn into an impossible tumult to control.

Luckily, it seemed that the Kislevites and the Dwarves were resisting the Daemons' assault in the city, so the east flank was covered. Suddenly, a courier hurried to his position to announce that Kriestov's army was onslaughting the western flank of Kul's army. Magnus' face showed no emotion, but his heart began to harbor hopes of victory.

Team Magnus reacts stoically against the Chaos charges, and countered with several units of heavy cavalry to support their tanks. Even the Great War Altar of Sigmar took advantage of the Flagellants' maniac resistance against Angkor the mammoth and charge against this last one. It was a clash of titans amidst the din of battle. Finally, the chained lunatics who pulled the altar managed to finish off the badly wounded mammoth, which collapsed slowly, making the earth tremble around him.


High Elves finally joined the fight. The Swordmaster unit charged against the horde of Centigors, who find out too late the deadly skill with the sword of their enemies.

Most combats at the center of the battlefield continued unchanged. Mostly, Chaos units were victorious, but either their success was against Unbreakable troops (Flagellants or Steam Tanks) or there was an Elector Count and a Battle Standard Bearer nearby to aid the Regimental troops taking the the Break tests.

In the west, the Winged Lancers charged the Trolls, trying to breach the rear of Kul's army. But his enemies turned out to be much harder and more dangerous than expected and the fight wouldn’t be resolved until the next turn, with many fewer Kislevites in their ranks.


In Kislev, An'ggrath and the Daemon Princes continued being focus of a harsh punishment of artillery fire, which left them all with a few wounds, but all of them still survived the turn.

Most of spells were dispelled by Chaos Sorcerers and those who finally succeded had no great repercusion on the game. Concerning Shooting phase, Team Magnus could hurt Chaos Emperor Dragon with some wounds. He was the unique large monster not fighting in close combat. Other missiles focused on minor units, chariots or individual characters, killing, among others a Tzeentch level 4 Sorcerer.