new turn on the wall, and this time we just start entering on the climax of the battle: dozens of combats, demons fighting inside the city and a confrontation between two titans in the center of the battlefield. And Magnus takes his part. Do not miss it! 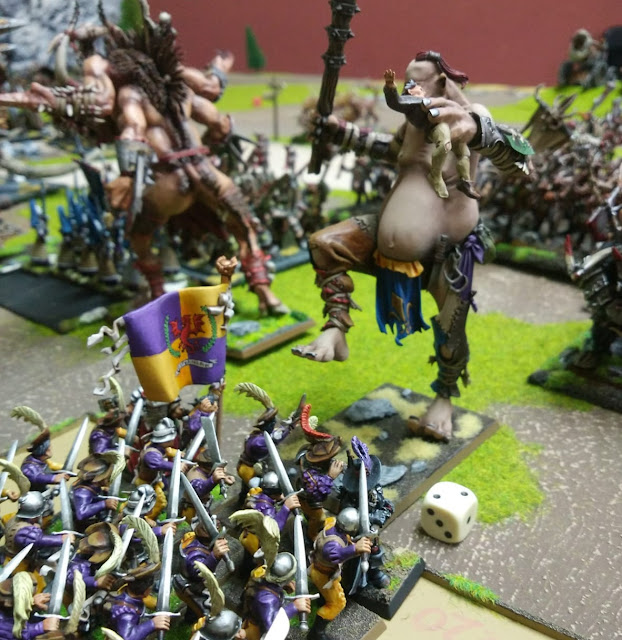 With the battle entering its peak, multiple combats were taking place around Asavar Kul. No enemy had got close enough for him to slaughter them with his axes. However, the push of his troops had been stopped much earlier than he had anticipated. It was as if, for once, humans were fighting with more determination, as if they were part of a single body, and not fighting each on their own, as they used to. Therefore, Asavar Kul had to suppress his desire to enter combat and stay within his own ranks, observing the development of the battle and reacting to enemy tactics.

The third turn was a battle of attrition by both armies. The fights against Steam Tanks remained unresolved and more units joined the multiple combats. In some areas, Team Kul managed to finish their enemies, in others, they were diminished. The two Chimeras managed to get to the back of the imperial lines, taking a couple of war machines but they were too lonely and it was only a matter of time before they fell under the incessant enemy fire.


Fortunately for them, in the central area of the battlefield there were other great monsters that tried to help. A Chaos Dragon and a Beligor in a chariot destroyed the horde of Flagellants that flanked the War Altar of Sigmar. Furthermore, Balaal, riding his Emperor Chaos Dragon, fulfilled his desire to enter battle at last by charging against the War Altar.

In Kislev, a Demon Prince with a single wound charged the DemonSlayer in one of the city's back alleys... and got the victory. The agonising dwarf gathered forces to try to end the life of his opponent with a final attack, but he did not succeed and perished.

With blood boiling with anger for taking two turns without entering in close combat and being shot on all sides, An'ggrath charged against the Thunderers in a visually spectacular way; although his attacks were not so spectacular... However he managed to break the dwarf line thanks to the thunderous stomp and force them to flee, without (incredibly) catching them in the pursuit. Beside him, another Demon Prince settled, prepared to fight against the Tsar of Kislev himself in the next turn.


At the magic phase, the theoretical magical supremacy of Chaos was dwindled by the three High Elves Archmages. Fortunately, Team Kul managed to sneak an Infernal Gateway into Ostermark Cavalry that left the unit crippled, with less than half of his effectives. On the other hand, the Comet of Casandora finally fell in front of the Hellcannons, killing the crew of one of them.

At the shooting phase, two of the projectiles fired by the Hellcannons hit a horde of Ostermark's Greatswords, causing many casualties. The survivors turned around and fled looking for safety outside the battlefield; however, Ostermark still had two more hordes!


The Trolls finally succeeded in breaking the morale of the Winged Lancers making them flee and catching them. On their pursue move they clashed into another unit of cavalry: the Knights of the White Wolf. This time, the opponent would be harder.

Magnus had a revelation. Surrounded by a sea of warriors in black armour and mounted on a huge war chariot, Asavar Kul ordered and directed his troops with terrible determination. Magnus realized that if he could finish that beast, the morale of the warriors of the north would fall. Without hesitation, he ordered his guard to charge against the horde of Chaos Knights that stood between the two generals and crossed the battlefield at full gallop. The force of the clash, flesh against flesh, steel against steel, was frightful.


From that moment onwards, all his senses were absorbed in the enemies in front of him. No matter that, he heard distant screams of joy and cries of terror alike. In those places, his troops triumphed or were torn apart. However, he could no longer do anything about it. Each Elector Count would have to fend for himself. He was determined to beat his rival, and he was getting very close to him.


In Kislev, the Tsar Alexander charged the Khorne Demon Prince, but the latter raised his axe and slaughtered the Tsar in a glimpse. The Demon was glad, because he had only two wounds left to endure the Tsar attacks. The Kreml Guard and the Clan Warriors also charged, but against An'ggrath. This demon has a special rule that grants ALL units within 12" +1 to strenght and fight with additional ranks (+1). Which, in practice, resulted in more attacks against him, more chances of hurting him and less armour save guard. However, I must admit the rule is not bad, but his general (that's me) played badly. An'ggrath ended up winning the fight thanks to the thunderous stomp (again), but both units held their positions. Furthermore, Thunderers who had fled on the previous turn, regrouped just at the edge of the board.

Outside the walls, Arbaal the Undefeated was the target of all possible fire (four Cannons, two Bolt Throwers, an Organ Canon ...) and finally fell. He fell without trying the fight. Another special character who left the battle without having thrown the dices. Imperial Handgunners and Kislevite Hunters over the walls fired the Furies that threatened the war machines. Knight Panthers next to them, supported by a Gryphon, charged against a Khorne Beast Chariot. They managed to finish him and raze to clash with the unit of Bloodletters behind it.

To his left, Demigryph Knights charged the horde of Khorne Marauders who was already in combat against a unit of mercenary Knights. That was too much for the northern warriors, who fled quickly.

However, it was in the center of the battlefield where the most spectacular combat took place. The personal bodyguard of Magnus, a unit of 39 Knights of the Griffon charged against Chaos Knights. The combat was very hard and many warriors fell on both sides, but the impetus of the charge, together with the mighty attacks of Magnus, decided the combat for the Empire side, which won the battle and made their opponents flee. They failed to catch them and ran into a horde of Chaos Warriors with halberds.

In addition, one of the Imperial Cannons managed to finish off the second Chaos Dragon, leaving its rider (like the previous one) on foot for the rest of the battle, although he had not yet said his lasts words...

Most of the war machines of the imperial center focused on the intact unit of Minotaurs that threatened its center-west. The Imperial forces, in order to make sure to cause a great amount of casualties on it, shot with a Hellblaster, some Crossbowmen, the Elven SeaGuard and the Elven Bolt Thrower. The unit lost almost half of its strength, but it was still fearsome.

Two Imperial Cannons and one Mortar exploded during that turn (at last!). However, the shooting phase did not end until one of the Tilean Light Cannons managed to wound -and kill- the second of the War Mammoths. Chaos was running out of big monsters!

Many other combats were decided on this turn in that area: the elven Swordmasters finally fell between the Gorgon and the Chosen Ones, the Chimera that had been charged by a SteamTank was destroyed, and the same fate suffered a Beastmen Chariot that charged against the Count Elector of Ostermark and his cavalry guard.

On the west flank, the Maneater Ogres entered the fight where the Demon Prince of Nurgle and the Chaos Knights tried in vain to destroy the Marienburg Landship. To tell it short, Maneaters changed their nickname and became Demoneaters. Meanwhile, the Trolls continued to stand the attacks of the Knights of the White Wolf. Those trolls were trully hard to kill...