we've already reached turn 4 and things are burning on the battlefield. Magnus and Asavar Kul are just a few steps far with dozens of combats around them. Team Kul have only a fistful of monsters alive and the imperial artillery continues to fire; however, inside Kislev, three colossal demons are wreaking havoc. Who will take glory in this turn? 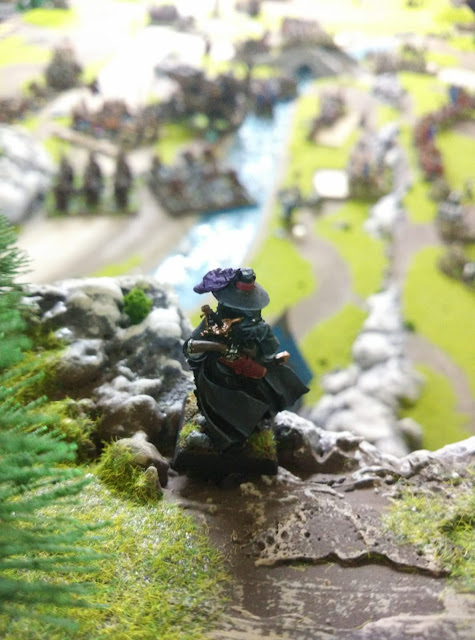 
Standing on his chariot, Asavar Kul witnessed the devastating charge of the human knights and his leader, which forced the Chaos elite regiment to move away. Kul fixed his gaze on the regiment’s champion. That was enough to regroup those cowards. He will ask for explanations later. But what brought the Anointed to anger was the view of that human general convincing his troops that their victory was near. How wrong he was! Trying to break the Chaos army center to reach him was a mistake. Kul will not give him that pleasure. At least, not yet. He wanted to see that despicable human suffering as he stared at their partners fall before he himself finish the human off.
....


At that point the result of the battle was completely uncertain. The Steam Tanks resisted the hundreds of hits received. Unless the most part of the big beasts had fallen, still there was a big number of infantry hordes so able to reach the combat and destroy the Imperial troops. Nevertheless, Dwarves Humans and Elves’ war machines and Ballistic Troops were turning the battlefield into a sea of bodies each turn.

On the west side, Trolls kept on their usual vomit and even less White Wolf Knights were able to hit them back. Even then, that knights still refuse to run away. Engra Deathsword was close, but before had to deal with Ar-Ulrik Kriestov, who resisted more than expected. The combat will be decided in the next turn. At their side, Chaos Warriors and Pestigors charged the last remaining Flagellants unit. The charge did not eliminate them, so the conclusion of the combat was also delayed.

To the East, one Steam Tank caused enough wounds to Chosens to make them run. Meanwhile, the combined charge made by Minotaurs and the Ghorgon against Swordsmen could not break the unit’s moral ¡It was like those humans should decided to turn into Dwarfs in every test!

In the middle of the board, things went better for Team Kul. The Great Altar of Sigmar fell before the Emperor Chaos Dragon, leaving a significant gap in the middle of the battlefield. At their side, the Ostermark Elector Count’s cavalry suffered a great number of casualties for the sake of a powerful spell. Also, the Daemonettes charged the hero on Demigryph, but they didn’t make a great damage. The ones who succeed were the unit of Nurgle Knights on Plague Drones, which finally entered into battle. They charged the Spearmen of Ostermark and erase them. Behind them, the remainder of a former Chaos Warriors horde finished off another Steam Tank (¡miracle!).

In the central combat, the unit of Magnus engaged in combat with a Chaos Warriors horde. But then they could not take advantage from their number. Team Magnus inflicted 16 wounds and Team Kul just 11, but thanks to horde impassivity, the Warriors stand. There were only 19 Imperial Knights now, without charge strengh…

Otherwise, much better went to Demigryphs, which charged too. They crushed a Marauders unit that had recharged them and were able to inflict many wounds to Chosen. As a result, both Chaos units were destroyed in their runaway and other Marauders’ unit was charged on their flank, completely surprised for that disastrous outcome. Was a hard punch for Team Kul, which was going to lose 4 big units in just two turns thanks to overestimate his own forces.

Nevertheless, under the walls of Kislev, things look better. The combined charge of Warriors, Bloodletters and the Skulls Throne crushed the Panther Knights unit, which left away. The three Chaos units pursued to get close Imperial lines. All get a "12" in their pursuit, so they not only eliminated Panthers, but also a Griffon who previosly reacted fleeing.

By their side, Flesh Hounds of Khorne charged to other Steam Tank ¡And left it with only a single wound! ¡So close!

Inside the city, the combat between An’ggrath and the Kreml Guard and Clan Warriors still carried on. Every time with less humans hitting back, but also with less wounds in his profile. In addition, the Demon Prince who previosly killed Tsar Alexander charged against the Thunderers on the border of the board.

Wielding Ghal Maraz firmly, Magnus bumped off Chaos Warriors in every hit. But he was conscious that things were not going well to their companions. Step by step, their forces were being decimated and the Chaos hordes looked like no end. After finishing another foe, Magnus took a breath and raised his head to glaze around. A sensation of void and disgraceful embraced him when witnessed his beloved friend Rueben Wrolfgar, Great Theogonist, being devoured by a gigantic bicephalic beast. Nevertheless, he recovered his encouragement when at the opposite side, saw the Demigryphs Knights piercing profoundly into enemy lines with and unstoppable charge. Magnus clenched his teeth, said some brave words to his partners and rejoined the battle.
....

At the West flank most of the combats tipped the balance to Team Kul’s side. Chaos Warriors and Pestigors finished off Flagelants, Engra Deathsword slayed Ar-Ulrik Kriestov; Trolls could finally finish the job with White Wolf Knights. Moreover, several Ungol Horse Archers ran by panic. In spite of all that, in that flank there were just three or four Chaos units and every one of them had been decimated previously. The contrary was for Team Magnus units, which were still too many and almost complete. Specially Maneaters who joined the party with no opponent within the chaotic units.

To the East, one Stem Tank finished off the Ghorgon, but Minotaurs bended the Swordsmen unit and, in their Pursuit, stayed at just one inch from Teclis’ Seaguard.

Ostermark’s Elector Count decided to charge with his knights guard the solitary Chaos Exalted Hero who lost his dragon. The Count thought that without his mount, there was no threat. He charged too confident, but before he was able to use his Runefang Sword, the Exalted brought him to the floor and gutted him, in front of the his astonished (theoretically) bodyguard.

Imperial Cannons roared at their backs and finished with Balaal, the Chaos Emperor Dragon rider. After rollig the dice for Monster Reaction the beast won hate and frenzy for the rest of the battle, although it only was 2 wounds to go.

The combat between Magnus and Chaos Warriors carried on. Spite of two prays had been summoned (gaining hate and special save 5+), Chaos Warriors worked pretty well and were able to knock down many knights. The combat will be finally decided on the next turn.

At their backs, Silver Helms, a Griffon and Middenheim Knights charged together both Gorebeast Chariots and some Chaos Warriors (the ones that finished off a Steam Tank). Although the powerful impact, all chaotic units stand stoically, thanks to Asavar Kul’s Leadership, who was behind them.

The combat between one Steam Tank against -initially- 12 Skullcrushers, from 2nd turn, finally arrived to its conclusion. The Chaos unit was charged at his flank by another Steam Tank and one imperial Captain on Pegasus also joined the combat. It was too much for those Khorne worshipers so they were crushed.

At the front of the city gates, one hail of shots covered both the Skull Throne and Bloodletters, erasing the former and leaving the latter completely harmless. Also fell Scyla and one Furies unit under the slopes of both cavalry charges. Inside the city, Longbeards took advantage of the leaning street to perform a 12’’ charge against Khorne Hounds. Even then, the Hounds resisted the attack.

But the very best for Team Magnus was the unit of Rangers charging An’ggrath from the back. Overboosted with hate thanks to his general, with a +1 to Strength by charge, and another +1 to Strength for the daemon’s presence, they succeeded on finishing him and taking him back to Warp. The tide is changing on Kislev!