Many heroes and beasts have already fallen, but more shall fall. We are approaching the end of the saga with a lot of hot spots on the board that must be resolved. Will Team Kul finally reach the Imperial artillery? Will Magnus break the center of the enemy's army with his cavalry charge? Soon you will know! 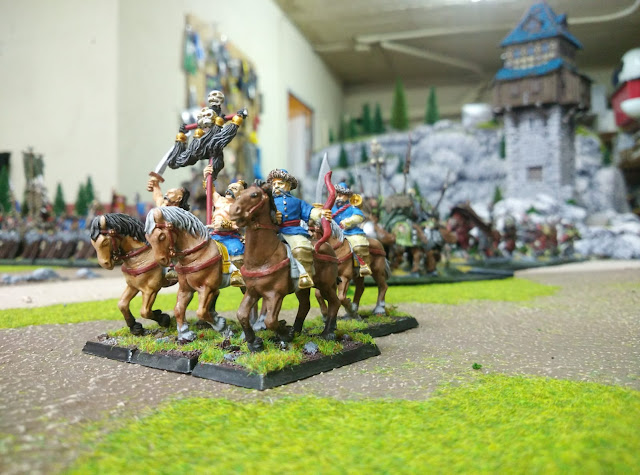 
Note: just before you get a surprise, I would like to remark that this was the last full turn we played. Yes, there was a turn 6, but it was something special and in a few days we will give you more details. We were forced to do this way because we lacked from couple of hours to play it normally, but at this point we were already aware that this was going to be the final turn.

Kul disliked what he was seeing. Both flanks of his army were becoming weakened. In the west, their troops started to be outnumbered, while in the east, the firepower of Dwarves and Men seemed impossible to overcome. Determined to do not lose an iota of time, he ordered his entire army to charge all visible enemies and break the front line of the Empire once and for all.


So it was. On the western flank all units charged... but not all charges were successful during the rolls, which meant they could not support each other and failed to break the line. This was one of the crucial moments of the battle, with many points at stake. The Putrid Blightkings with Valnir the Reaper in the lead (and the only ones capable of dealing with the Ogres Maneaters) failed their charge, leaving the flank of the Engra's Chosen (who had charged against the Landship) totally uncovered. Also the Knights of Nurgle failed their combined charge with the Warriors of Chaos against the Reiskguard on foot, but in this case it was enough to break the will of the humans, which, even having the Count Elector of Reikland and the standard bearer of their province closed to them, they decided to turn around and flee. They were trapped and were eliminated, while the Warriors overran the Empire War Chariot, in the middle of the river.

The Hellcannons did their job. They managed to cause panic to 5 units located on the other side of the river. With some luck, in the next turn some would leave the edge of the table.

On the other hand, the Pestigors charged against the Reikland Swordsmen who guarded the bridge, but the combat ended in a draw thanks to the numerical superiority of the Imperials.

Gors also charged (for the first time!), but there were few chances against a Steam Tank and they bounced off. 'Bravo' guys! What a great role! In their defense, it should be remarked that they were located in a location with just few affordable targets. 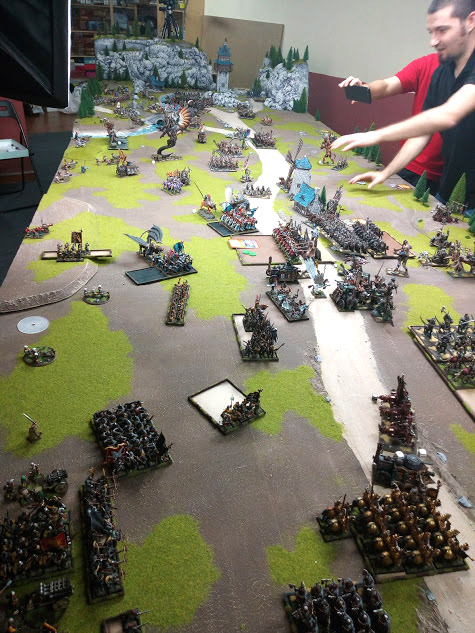 The Minotaurs finally reached the Teclis' Sea Guard, and there was no mercy. All the High Elves were crushed under the weight of justice, I mean, of the Minotaurs. Also the furious Emperor Dragon charged, this time against the remains of the personal guard of the Ostermark Count Elector, and basically they left headless corpses standing in the battlefield.

In the center of the battlefield, there was a multiple charge that seemed to sentence that area. The Knights of Nurgle riding Plague Flies, together with two Chariots, supported the Daemonettes in the fight against the Demigryph and 4 Knights from Ostermark. What happened then, according to Diosko, was "that his hand was dropped" during the roll. But for the rest of Team Kul, what was really dropped were other parts of our bodies such like the eyes and the brain: we lost that fight, but also we saw the Daemonettes being massacred and the Flies fleing and being caught.

Better things happened to the Warriors of Chaos that fought against Magnus, since little by little they were ending up with the personal guard of the leader of the Empire. Four men fell on each side, and the Chaos Warriors won the fight thanks to the extra row. Hopefully for the Empire, Magnus and his unit were steadfast.

On the eastern flank, the Dragon Ogres and the Shaggoth charged the Demigryphs which were wreaking havoc in that area. There was a hard-fought, but Demigryphs focused on killing Chaos Marauders and got many casualties. Finally, the fight was favoured for the Team Magnus and, in the subsequent check, the Shaggoth (the one with the highest Leadership), fled. At least, the SkullCrushers could charge and destroy what was left from the mercenary Cavalry.

In Kislev, the last Demon Prince charged the Kreml Guard from the back, eliminating the battle standard bearer with his attacks and the rest of the unit with his thunder stomp. Finally, the Bloodthirsters and the Herald on Juggernaut charged against the Longbeards. They won the fight, but the Dwarves kept their position.

The only thing worth to mention in terms of shooting and magic was a pair of impacts from the Hellcannons to the Stirland Greatswords and Halberdiers. The Team Kul was hoping to cause panic over those units and, given their flight movement, to drag the panic on that strong flank of the Empire. Unfortunately, thanks to the presence of the Elector Count and to the battle standard bearer, both units controlled their nerves and stayed where they were.

Despite the immensity of the Chaos army, Magnus could still hear the roar of the cannons and the muffled volleys of the arquebuses in the distance. That meant that the beasts from the north could not get the rear of the army, where the artillery and the firing regiments were waiting. It was a good sign. However, the efforts were almost in vain: he was only able to distinguish two units of cavalry in the whole battlefield. One of these passed fleeting by his side to attack directly Asavar Kul. He gave a prayer to those brave men of Middenheim, while he was counterattacking with dexterity the enemies in front of him.


Despite the push of Chaos in the previous turn, the imperial line mostly remained stable. In the west, the mercenary Ogres charged against the Engra's Chosen, who were isolated in combat and annihilated. On the bridge, a Captain mounted on a Griffon supported the Swordsmen and both units together managed to defeat Pestigors. Only the Warriors of Chaos managed to stay halfway across the river, engaged in combat against the Imperial War Wagon.

The Minotaurs finally reached the imperial rear, but once there, they were riddled by a combination of Cannons, Hellblaster Volley Guns and Bolt Throwers. None of them remained alive. Near them also the Chaos Emperor Dragon fell, mortally wounded by a lonely cannon. That left Team Kul without any option to reach the Imperial war machines.


In the center of the battlefield, the Knights of Middenheim and a Captain on a Griffon saw their chance to take place in the history books and they charged nobody else than Asavar Kul. They managed to deal a wound on him, but many knights fell and they clearly lost the fight. Luckily for them, Magnus was close, which allowed them to use their leadership and to repeat the Morale test. As for Magnus himself, his combat reached its end. The Warriors of Chaos managed to bring the last of their comrades down, and left the general of the Empire alone. Only the Unbreakable rule saved him from being anihilated.

The combat between Demigryphs, the Dragon Ogres and the Chaos Marauders, continued as it was in the previous turn: Demigryphs caused nine wounds on the Marauders, and the same number of wounds were dealed to the imperial knights from the beasts of Chaos. However, only two marauders remained, the standard-bearer and the champion, giving the victory to the imperial side for a single point... which was the one granted by the Demigryph Musician! Damn... Marauders fled, but the Dragon Ogres held.

Other combats in the same area got tie, except for the charge from the Stirland's Greatswords to two Skullcrushers, which were sent to a better (or worse, from their point of view) life. All the artillery fire in that area was concentrated against the intact unit of 30 Khorne Chaos Warriors, which were approaching the imperial fire lines. When the fire stopped, only seven of them were still alive.

In Kislev, Khorne Demons efforts to get rid of the Longbeards were futile. They won the fight again, but the Dwarfs showed their stubbornness and kept their position.

For the outcome of the battle, you will have to wait until the end of the week!